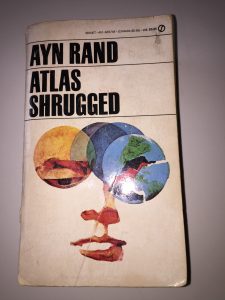 By Monty Hagler
(Part of a continuing series on the books that made the journey to our new office.)
“Who is John Galt?”
I find that people either immediately know the opening sentence to Atlas Shrugged or have no idea why it would take nearly 1,100 pages to answer that question.
In the summer of 1986, I had plenty of free time for reading. I was lifeguarding and coaching a swim team, and the smart people I knew (like John and David Hood) kept referring to Ayn Rand’s Objectivism philosophy. I dove in, and Atlas Shrugged still sits on my office bookcase 30 years later.

At first glance, it’s an obvious choice. What self-respecting entrepreneur and business owner doesn’t admire the rugged, idealistic individualism that created Rearden Steel? How can you not admire Dagny Taggart and her determination to operate her railroad despite ineptitude, bleakness and mediocrity at every turn?
But while there is much I admire about the world created in Atlas Shrugged, I keep it around because it reminds me that the world does not exist in such stark contrasts of wrong or right, perfect or imperfect. There are countless shades of grey.
As we enter 2017, Atlas Shrugged seems to be a fitting book for our times. “They were not fighting over what to do, but over whom to blame,” is a line that sums up the senseless whirl of activity among many characters in the book. It also captures much of the negative energy being expended today. We need to spend more time rolling up our sleeves and getting things done, rather than complaining or bemoaning the state of the world. We need to start the motor of the world.
Atlas Shrugged sits on my bookcase because it reminds me that it is often the small decisions and daily choices we make, rather than grand decisions, that shape and define who we are in this world. I appreciate Dagny Taggarts’s observation that her behavior was not random or by happenstance, but “…with full knowledge of the values by which we make our choices.” I wish us all the courage of our convictions and faithfulness to values to guide our choices in these turbulent times.