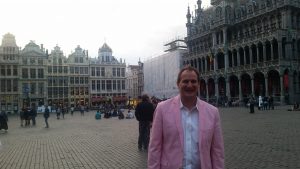 By Monty Hagler
Let’s start with the end.
There are remarkably few reminders of the March terror attacks in Brussels until you depart for the recently reopened airport three hours in advance of the flight home, laden with Belgian chocolates. Traffic jams and merges into a single lane on the approach, allowing soldiers at multiple check points to peer into vehicles as they slowly move forward. Taxis drop passengers 400 yards from the terminal. Hundreds of people drag their bags towards the base of the parking deck. Then up you climb, circling the spiraling car ramp in loops that make you breathe like the 30-minute mark in spin class.
END_OF_DOCUMENT_TOKEN_TO_BE_REPLACED 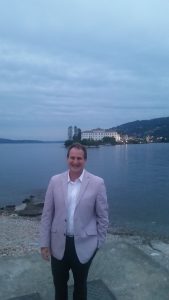 By Monty Hagler
I’ve spent eight of the last 16 days working with more than 80 agency leaders in the Worldcom partnership at meetings in Italy and Georgia. Despite jet lag and road weariness from planes, trains and automobiles (not to mention pounds of pasta, copious presentations, early morning meetings kick started with expresso and late night socializing fueled by red wine and brown liquor), I am energized. Engaging with peers who are at the top of their game and willing to share their knowledge has a way of doing that.
END_OF_DOCUMENT_TOKEN_TO_BE_REPLACED

By Monty Hagler
As RLF’s clients increasingly engage in campaigns and business relationships in every corner of theglobe, they count on RLF to create effective, localized and culturally appropriate public relations and marketing campaigns. That’s a key reason why RLF joined the Worldcom partnership composed of 109 independent agencies across six continents, and why we’re delighted to have participated in the creation of an e-glossary of public relations and marketing terms from around the globe.

Many of these terms will undoubtedly be familiar, but there are hidden gems on every page that provide insights on how public relations and communications are viewed in different countries and regions. Our partner in Cape Town, South Africa offers us “Blegging,” the practice of asking bloggers for free assistance.  Our partner in Indonesia captures the importance of reaching rural markets through “Community Audio Towers” that narrowcast information about agriculture, health and nutrition. Our partner in Japan offers us “Kizuna,” a term to describe a common hardship that unites people.
The nearly 400 entries in this e-glossary include terms that are playing an important role in the evolving nature of our business. For example, we have long lived in world of “Paid Media” (advertising) or “Earned Media” (media relations). But communication and persuasion are increasingly impacted by “Shared Media” (online and social media sites where many voices compete for attention and relevance), “Promoted Media” (paying to push content to a much larger audience than would access it organically) and “Owned Media” (companiesorganizations creating and promoting content via channels they control such as their websites, e-newsletters and blogs).
In the coming months, I will travel to Peru and South Korea for meetings and strategy sessions with my Worldcom partners. I’m looking forward to getting more immersed in how campaigns can be adapted and enhanced in global markets, and bringing back best practices to our team.
You can download the glossary from the Worldcom site.

On these long, hot summer days, my family has been playing numerous games on the porch at our lake house. Nothing involving computers or video games – we’re old school addicts for cards, checkers, Scrabble and Monopoly.
I’ve been playing Monopoly for decades, so I was deeply surprised when Peyton, my 9-year-old daughter, announced that we were not “playing by the rules.” She’d spent some time actually reading the small print Monopoly rules, and she was determined to start enforcing them. Some rules were not a big deal. There is no pot of money for whoever lands on “Free Parking.” But other rules fundamentally changed the way I had always played the game.
For example, I had understood that you can only buy a piece of property when you land on it. But that is not the rule. Any player can bid on a piece of property if the person who lands on it declines to purchase it. That dramatically alters the pace, flow and strategy of the game. It is less dependent upon luck – i.e. where the dice take you – and much more dependent upon fundamental strategies to buy, hold and sell real estate.
Let’s just say that under the new system – the legal way of playing the game – I got slaughtered by not only my 9-year-old, but my 11-year-old daughter as well. My mind couldn’t grasp the new approach, and my ability to compete under the real rules was seriously compromised!
I have thought about that lesson a lot as current events have unfolded in business and sports. When organizations ignore the rules, don’t learn the rules or deliberately bend the rules, it changes the playing field for everyone involved. It creates consequences for those who play by the rules, often to their detriment, until it’s exposed that violations are taking place.
Ten years ago, the telecommunications world was being roiled by an upstart company called Worldcom (no relation to the global public relations partnership that RLF is a part of). Worldcom was grabbing market share, offering unbelievable prices on services and hastening the demise of traditional telephone companies. I heard many stories from friends and professional colleagues of their bosses who were pounding the table asking their teams, “Why can’t we compete with Worldcom on price?” The answer was simple:  Worldcom was not playing by the rules. The Worldcom CEO is currently serving a 25-year prison sentence for a $100 million accounting fraud, but the damage was done before he was ever convicted.
The list goes on – Enron, Madoff and now the Barclays LIBOR scandal. Even the Penn State scandal is reflective of an organization that benefited by not playing by the rules. Reporting the sexual abuse by a member of the coaching staff would have created negative publicity detrimental to the football program, so the rules of reporting illegal, unethical and immoral activities were ignored. That created an unfair playing field for the colleges and universities that competed with Penn State for players and coaches, and now the consequences of not playing by the rules are far more severe and damaging than if the issues had been addressed in the beginning. More importantly, it allowed the unconscionable abuse of young boys to continue.
It’s the job of communications professionals – whether in-house or agency consultants – to consistently advocate for organizations to understand, interpret and play by the rules. There is still plenty of room for flexibility and creativity. It would be boring, and career threatening, if we lived in a world that gave us no options in defining the meaning of things. But if companies have to play by the rules, the world looks very different. It is more transparent and rewarding of merit, hard work and skill. It operates more efficiently, sustainably and fairly. Perhaps it’s my Boy Scout training talking, but that is the kind of world I enjoy competing in.

WORLDCOM Public Relations Group – America’s Region Annual Mtg from RLF Communications on Vimeo.
The above video shares remarks from Jeff Cole, director of University of Southern California’s Annenberg Center for the Digital Future. Jeff spoke at the recent WORLDCOM Public Relations Group conference in Hawaii that I attended, and I thought it was an informative, insightful talk (and follow up conversation) about how digital media is reshaping communications. I was particularly interested in his view that tablet computers are going to replace virtually all personal computers, and what that means for how we create, view, share and process information.

I recently had the opportunity to hear Norman Stowe, CEO of Pace Group Communications in Vancouver and WORLDCOM partner, present near Milwaukee, WI at the Upper Midwest Travel & Tourism Conference to more than 100 travel and tourism professionals.  The speech focused on lessons learned from a number of catastrophic events that have taken place in recent years:  the tsunami in Japan, Hurricane Katrina in New Orleans, the collapse of a coliseum roof in Vancouver, the outbreak of SARS in Canada and the BP oil spill in the Gulf of Mexico.
During each of these disasters, WORLDCOM partners played (and continue to play) a critical role in helping communities get back on track, with a particular focus on communicating with external audiences what is happening and the steps being taken on the road to recovery. Disasters – whether man-made or natural – take a tremendous toll on a community’s revenue from a travel and tourism perspective. Events get cancelled, hotel rooms go unbooked and attractions are left bare.
Norman shared many good points, but highlighted below are five intriguing tips that he and I discussed at dinner the night before.
Who Tells the Story Best
In deciding who is going to be the spokesperson in a time of crisis, pick the person who can tell the story best. A person’s title matters far less than having someone who is comfortable talking to the media, who is adept at explaining what is taking place and can elaborate on what is yet to come. Storytelling is not a negative word here. You need someone who can capture what is happening and articulate that to the outside world.
As a corollary, Norman and I both agree that trustworthiness is more important than technical expertise for crisis communications. Norman had a particularly sad but funny story about an engineer being named spokesperson during a crisis, despite the fact he disliked talking with the media and refused to answer any questions that he did not think were relevant.
Don’t Forget the Binder
When a crisis happens, take five minutes to pull out the “Crisis Communications Plan” that has been developed, review the core steps that need to be handled – regardless of what the specific nature of the crisis is – and then get to work. Companies and organizations spend a tremendous amount of time preparing crisis plans, but rarely take the time to put them to work when a crisis hits. The steps are laid out, and while they will undoubtedly need to be tweaked, following that big binder will ensure fewer things are missed or forgotten.
Make Decisions
In a crisis situation, the ability to make decisions quickly is a critical skill. A failure to act compounds the entire chain of response. Yes, information needs to be gathered and assessed, and there must be collaboration among various agencies and groups. But someone must be the decision-maker, and his or her most important task is to MAKE DECISIONS.
Norman put it this way: “In a crisis, you have to make 100 decisions a day. You should aim to be right on 85 percent of them. Be decisive and let people move forward. If you only make 50 decisions a day – even if you get them all correct – you have made things even worse and the recovery more difficult.”
News Media Competition Trumps Accuracy
For anyone who has been involved in dealing with the news media during a crisis, this is a sad, harsh reality. Media coverage is driven by who gets the first details of a story – the sadder and more outrageous the better. Accuracy is lower on the list of what matters to media outlets competing for story angles and breaking news. Organizations must be equally aggressive in telling their story to the media.
The Travel & Tourism Practice Group of WORLDCOM has established a speaker’s bureau of top agency leaders who have handled a wide range of crisis communications projects. If you would like to book a speaker for an upcoming event, or learn more about how to help your organization prepare for potential crises, please email me at mhagler@rlfcommunications.com.