By Monty Hagler
(Part of a continuing series on the books that made the journey to RLF’s new office space)
My father gave me a copy of Undaunted Courage by Stephen Ambrose in 1996. The book focuses on the Lewis & Clark expedition to explore the American West and bring back a we 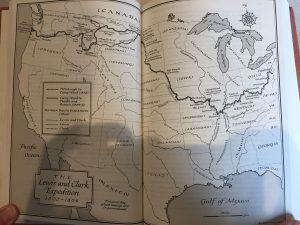 alth of knowledge that transformed our country and confirmed the incredible value of Thomas Jefferson’s deal for the Louisiana Purchase.
Ambrose captures how difficult the task was in 1803 as the expedition had to overcome numerous obstacles. Malaria. Leaking canoes. Hostile Indian tribes. Unnavigable rivers. Paralyzing cold. Grizzly bears. Lost supplies. But nothing could stop the small, determined Corp of Discovery. They pushed forward. Took notes on botany, geography, ethnology and zoology. Filled journals with observations on weather, rocks and people. Discovered and described 178 new plants and 122 species and sub-species of animals. Drew maps and recorded the most direct, convenient route across the continent.

As I read the book, I marveled at the ability of Merriweather Lewis to make decisions and live with them. Ambrose writes that as Lewis set out from the last outpost, he knew there would be “no more incoming letters, no orders, no commissions, no fresh supplies, no reinforcements. Lewis and Clark were as free as Columbus, Magellan or Cook to make their mark on the sole basis of their own judgements and abilities.”
I keep Undaunted Courage on my bookshelf because 1996 was a time of great transition for me personally and professionally. As I read the book, I was charting new paths into the unknown. I was ending a 10-year relationship. I was leaving a secure job with a Fortune 500 banking corporation. I was entering uncharted territory working on the agency side of the communications business. I was moving to a new city and leaving behind family, friends and a community where I felt at ease.
My personal challenges paled in scope and significance to the opening of the American West. But simply reading about what tenacity can accomplish helped me push through my own reservations. Like Lewis & Clark, I weighed my options, did my due diligence, listened to my heart, trusted my instincts and moved forward. Twenty-one years later, I can say that I have never regretted any of the decisions made during that difficult time. And I will always treasure the book that my father gave me and the unconditional support of my parents.