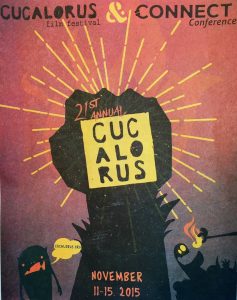 For the second year, RLF Communications had the honor to work with the Cucalorus Film Festival as a sponsor and public relations partner. The 21st annual festival was a huge hit, and our team had the opportunity to attend numerous screenings, interact with filmmakers and engage in countless conversations with creative thinkers.
END_OF_DOCUMENT_TOKEN_TO_BE_REPLACED

Late this summer, RLF started working for a new entertainment and tourism client with quite a distinctive and funny name: Cucalorus, an internationally-recognized film festival located in Wilmington, North Carolina, and one of the largest independent film showcases in the United States. The five-day festival was named “One of the Coolest Film Festivals in the World” by MovieMaker Magazine in 2013.
This year, the Cucalorus Film Festival, being held from Nov. 12-16, is celebrating its 20th anniversary with an impressive line-up of films ranging from love-lost unicorns and teenage bank robbers to family flicks and social justice documentaries. In total, more than 200 independent films will be screened, including two films debuting as world premieres, a host of films making their inaugural Southeast U.S. showing, award-winning international films and original works from both well-known and up-and-coming filmmakers.
Last year, nearly 15,000 people attended the Cucalorus Film Festival and this year’s attendance is forecast to be even greater.
As storytellers ourselves, the RLF team is proud to support Cucalorus and all of the artists, producers and filmmakers who turn their dreams into films that inspire, inform, entertain and shape the way we view our world. Our team is working closely with the festival’s marketing staff to share the unique story of the Cucalorus Film Festival and the compelling films it will feature this year.
Cucalorus is an important alternative outlet and launch pad for artistic, thought-provoking and educational films from exceptionally talented people. We look forward to helping the festival reach its potential and continue to gain traction to be one of the top film festivals in the world.
To learn more about the Cucalorus Film Festival, visit www.cucalorus.org.